KNOW BEFORE YOU GO
2 and older require a ticket for entry. 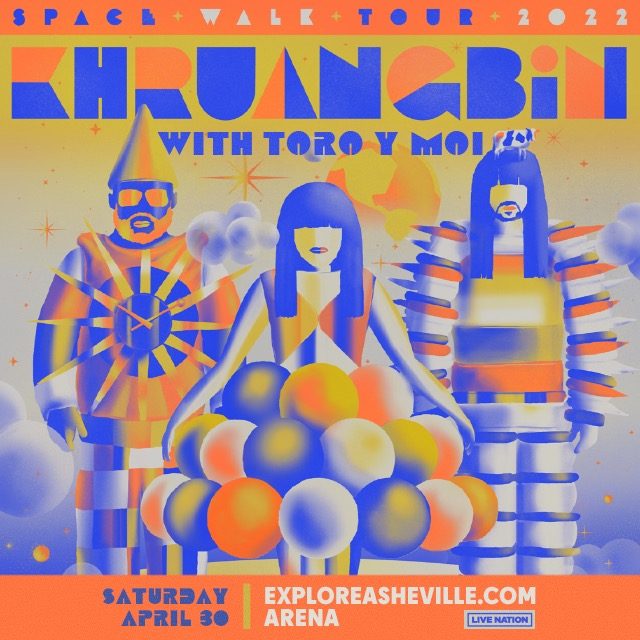 Khruangbin has always been multilingual, weaving far-flung musical languages like East Asian surf-rock, Persian funk, and Jamaican dub into mellifluous harmony. But on its third album, it’s finally speaking out loud. Mordechai features vocals prominently on nearly every song, a first for the mostly instrumental band. It’s a shift that rewards the risk, reorienting Khruangbin’s transportive sound toward a new sense of emotional directness, without losing the spirit of nomadic wandering that’s always defined it. And it all started with them coming home.

By the summer of 2019, the Houston group—bassist Laura Lee, guitarist Mark Speer, drummer DJ Johnson—had been on tour for nearly three-and-a-half years, playing to audiences across North and South America, Europe, and southeast Asia behind its acclaimed albums The Universe Smiles Upon You and Con Todo El Mundo. They returned to their farmhouse studio in Burton, Texas, ready to begin work on their third album. But they were also determined to slow down, to take their time and luxuriate in building something together.

It’s a lesson Lee had recently learned with the help of a new friend, a near-stranger who had reached out when she was feeling particularly unmoored, inviting her to come hiking with his family. That day, as they’d all made their way toward the distant promise of a waterfall, Lee had felt a dawning clarity about the importance of appreciating the journey, rather than rushing headlong toward the next destination—something she’d almost lost sight of during the band’s whirlwind rise. When they reached the waterfall at last, Lee’s friend urged her to jump, a leap she likens to a baptism. As she did, he screamed her name—her full name, the one she’d recently taken from her grandfather. In that instant, Laura Lee Ochoa was reborn. She emerged feeling liberated, grateful for what her friend had shown her. His name was Mordechai.

Ochoa’s rejuvenation found its expression in words—hundreds of pages’ worth, which she’d filled over a self-imposed day of silence. As Khruangbin began putting together the songs that would make up the next record, discovering in them spaces it seemed like only vocals could fill, they turned to those notebooks. Khruangbin had worked with lyrics before: the love-letter poetry of “Friday Morning,” the ghosts of conversations gone by in “Cómo Te Quiero.” But this time Ochoa had found she had something to say—and so did the songs. They needed each other. And letting those words ring out gave Khruangbin’s cavernous music a new thematic depth.

Chief among those themes is memory—holding onto it, letting it go, naming it before it disappears. Again and again the songs play on those notions, from the sun-dappled disco of lead single “Time (You And I)”—which evinces the feeling of a festival winding down to its final blowout hours—to the lilting “So We Won’t Forget,” which finds Ochoa filling her apartment with memories she’s scrawled on Post-Its to prevent them slipping away. It’s there, too, in “Dearest Alfred,” which was inspired by a trove of letters Ochoa’s grandfather wrote to his twin brother, as well as “If There Is No Question,” a metaphysical devotional (by way of Marvin Gaye) that harkens back to Johnson and Speer’s earliest days in a church band. And those same nostalgic wisps curl all around “Connaissais De Face,” a Middle Eastern vamp by way of Serge Gainsbourg that evokes all the ruminative romance of a French New Wave film, layered with its own tender dialogue of reminiscence.

Musically, the band’s ever-restless ear saw it pulling reference points from Pakistan, Korea, and West Africa, incorporating strains of Indian chanting boxes and Congolese syncopated guitar. But more than anything, the album became a celebration of Houston, the eclectic city that had nurtured them, and a cultural nexus where you can check out country and zydeco, trap rap, or avant-garde opera on any given night. The Roy Ayers funk of opener “First Class” created a lush bed for the band to stretch out on, singing wryly about popping champagne while jet-setting all over the world. But in the end, those brags are revealed to be a shoutout to the home that made all this possible, a love that’s evident in its hands-in-the-air refrain of “H-Town.”

In those years away from that home, Khruangbin’s members often felt like they were swimming underwater, unsure of where they were going, or why they were going there. But Mordechai leads them gently back to the surface, allowing them to take a breath, look around, and find itself again. It is a snapshot taken along a larger journey—a moment all the more beautiful for its impermanence. And it’s a memory to revisit again and again, speaking to us now more clearly than ever.