SOLD OUT : The Final Campaign - HCCA

SOLD OUT : The Final Campaign

AVAILABILITY
Tickets On Sale Friday 7/12 at 10am 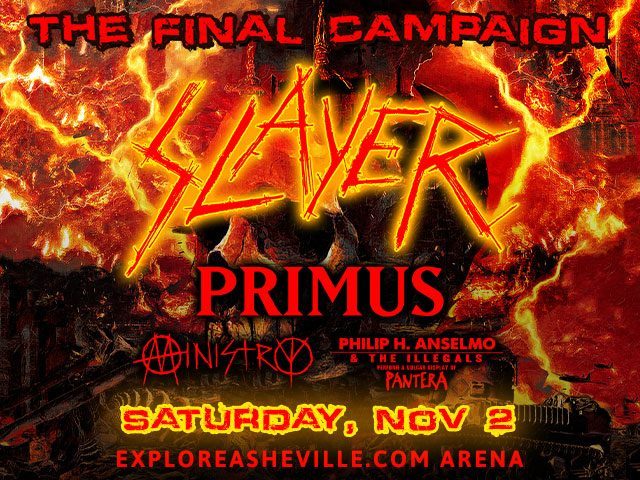 SPECIAL INFORMATION: We do encourage and support fans to dress up for this event; however, ABSOLUTELY NO MASKS or FULL PAINTED FACES will be permitted in the venue. Any and all variations of prop weapons or any props that could be used as weapons will not be permitted. All guests and bags will be required to proceed through a search upon arrival including walk-through metal detectors. Moshing, crowd surfing, and related activities are not allowed during the concert (these actions may result in ejection from the premises).

The following items are NOT ALLOWED at this event:

*All beverages inclusive of bottled water and soda WILL BE poured into a cup in the spirit of public safety.

Security will be checking tickets and only general admission tickets will be allowed on the floor. If you have any questions, please check with an usher upon arrival concerning any seating and/or ticketing questions.

Slayer’s Final World Tour began on May 10, 2018 with the band’s intention to play as many places as possible, to make it easy for the fans to see one last Slayer show and say goodbye. By the time the 18-month trek wraps on November 30, the band will have completed seven tour legs plus a series of one- off major summer festivals, performing more than 140 shows in 30-countries and 40 U.S. states.

Slayer’s Final World Tour has been a wild ride. Three bus drivers, four truck drivers, and a crew of 32 have traveled all over the world to set the stage for this farewell. At most shows, Slayer’s pyro expert set off 160 pounds of propane and 10 liters of 99% isopropyl alcohol, prompting the Phoe– nix New Times reviewer to comment on the “eyebrow-singe- ing pyrotechnics that could be felt even 10 rows behind the pit.” In Toronto, one diehard fan was ejected from the concert before Slayer took the stage, so jumped into Lake Ontario (that surrounds the Budweiser Arena) and swam back to the venue. The Tampa Bay Times’ Jay Cridlin wrote, “ Beginning with the throttling opener ‘Repentless,’ Slayer tore through their set like a flaming cigarette boat across the river Styx, charring up a vicious circle pit by the stage,” and Detroit’s Gary Graff noted in his Oakland Press review the “10,000 headbangers who skipped the ‘Game of Thrones’ finale to pay homage to the pioneering quartet.” “The sheer physicality of their show was something to behold and was yet another indi- cation that while the band may be calling it a career, they are going out on top, playing at their absolute best,” wrote Andy Lindquist for the SF Sonic, and Guy D’Astolfo with the Youngtown Vindicator ended his review with this: “After the final note, Tom Araya stood alone, scanning the crowd…forg- ing a mental imprint of the moment.  After a minute or two, he went to the microphone and said, ‘I’m going to miss you guys.’  Then he exited and the lights went up.”

Open to public
Scroll to top
Send A Message