ENTRY POLICY
Updated March 18th: There are no entry requirements for this event. 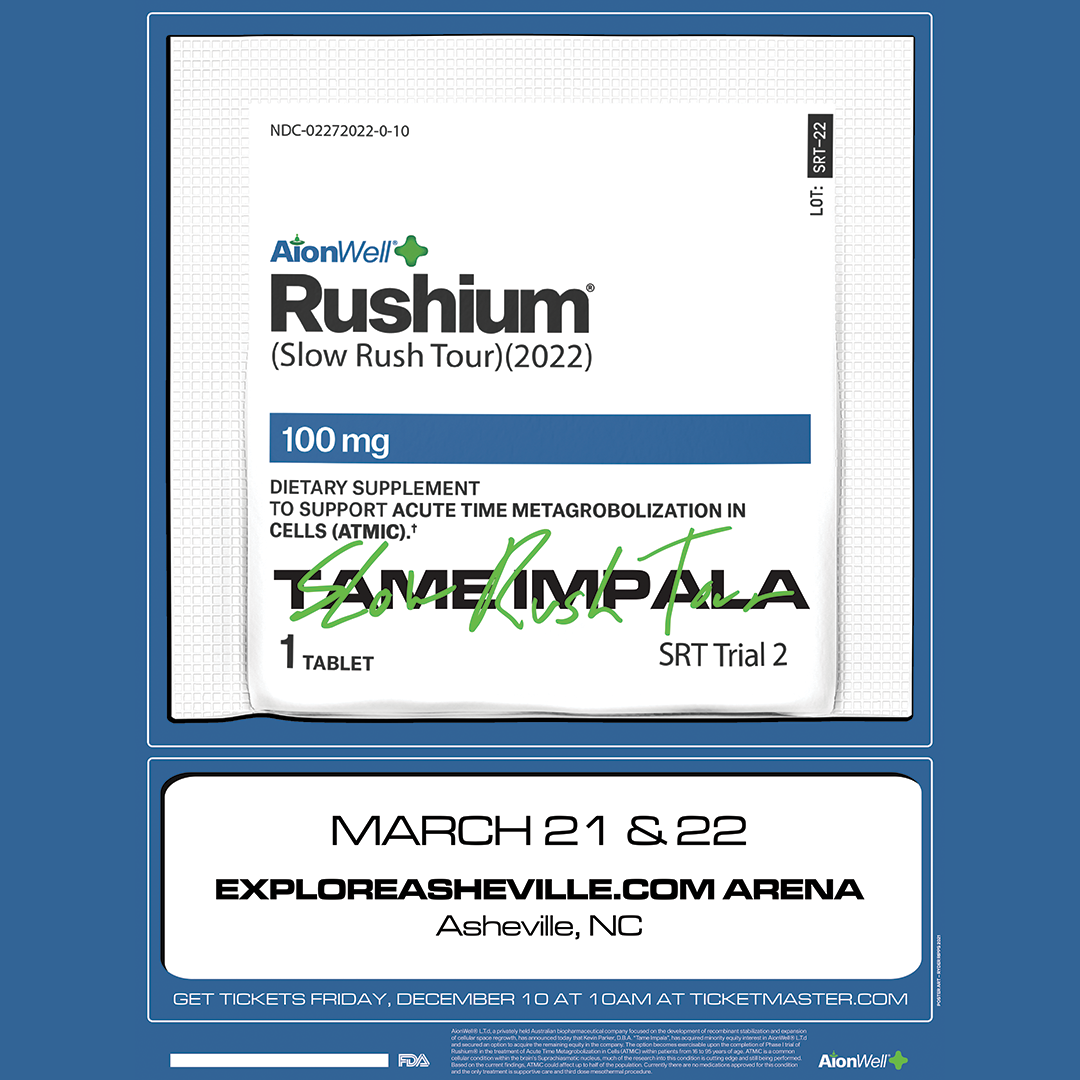 Tame Impala (Kevin Parker) has confirmed a 2022 North American tour with dates that kick off February 27 with a headline slot at the Innings Festival at Tempe, AZ’s Tempe Beach Park.  On March 7 Tame Impala hit the road for a run of headline arena dates that conclude with another festival appearance at the Buku Music + Art Project in New Orleans, LA on March 25th. The tour also hits the Okeechobee Music & Arts Festival, Scotiabank Arena in Toronto on March 9 and Brooklyn’s Barclays Center on March 14th. All dates are listed below and tickets go on-sale on Friday, December 10 at 10am local time. For more information visit www.tameimpala.com.

With today’s announcement Tame Impala also share “No Choice,” a track off the forthcoming The Slow Rush Deluxe Box Set which will be released on February 18, 2022 via Interscope.  The box set features B-Sides and remixes of his GRAMMY-nominated 2020 album. The physical version will feature 2 transparent red LP’s and alternate artwork including a 40-page booklet and The Slow Rush 2050 calendar. Both the physical and digital versions released on February 18 will feature another never-before-heard b-side “The Boat I Row,” the pre-album single “Patience” (both original and remix), plus additional extended versions and remixes. Last month he shared “Breathe Deeper (Lil Yachty Remix)”. The box set is available for pre-order here.

The Slow Rush, released in 2020, has amassed over 1.5 billion streams worldwide. The album landed at #1 album in multiple territories and was his highest charting album to date in both the US and UK with 14 top 10 chart positions around the world.  The album serves as a deep reflection on the passage of time. “The Slow Rush is an extraordinarily detailed opus,” said Pitchfork. “I have to marvel that all this sound and history comes from Parker alone, picking every string and twisting every knob.” The Slow Rush has amassed over 1.5 billion streams and counting.

In addition to its chart success, Parker won an ARIA Awards haul, taking home Album of the Year, Best Group, Best Rock Album, Engineer of the Year and Producer of the Year. Parker was nominated for two GRAMMY Awards in 2021 for Best Alternative Album and Best Rock Song for the single Lost In Yesterday. This marked his third nomination in the Alternative category, having previously been nominated for Currents and Lonerism. The Slow Rush was also nominated for two Billboard Music Awards and an American Music Award (AMA).

Parker has emerged as one of the most influential voices of the last decade. Thanks to the ravenous demand of fans for a transcendent live performance, Tame Impala has headlined festivals and theatres around the world and released four full length albums – InnerSpeaker, Lonerism, the RIAA Platinum-Certified Currents and The Slow Rush. As a writer and producer Parker has collaborated with The Weeknd, SZA, Lady Gaga, Mark Ronson, Kanye West, Kali Uchis, Theophilus London, Miguel, A$AP Rocky and more.

Featuring The Wolfpack
Thomas Wolfe Auditorium
All guests must be fully vaccinated to attend this event.
MAR