#ItAllStartsInAsheville – We are tearming up with Asheville Championship to offer (2) pair of tickets for the November 12th and 14th tournament days at the ExploreAsheville.com Arena. By entering the contest below, you will be entered for a chance to win tickets for you and friend for this one-of-a-kind basketball event.

*By entering this promotional giveaway, you also give permission to receive marketing messages from Asheville Championships.

Stand-up comedian, writer, and actor, Fortune Feimster, is one of the busiest women working today. She first became known as a writer and panelist on E’s hit show Chelsea Lately, and then starred as a series regular on The Mindy Project for Hulu and Champions for NBC

Here’s your chance to win 4 tickets to see Blippi: The Musical at the Thomas Wolfe Auditorium on September 10, 2021!

Blippi is a fun, energetic character known for his signature blue and orange outfit and his entertaining and educational videos. He helps teach kids colors, letters and so much more! 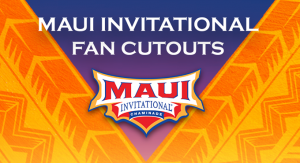 Support your team with a life size fan cutout at the 2020 Maui Invitational in Asheville!

While we wish we could host you for the Maui Invitational in Asheville, North Carolina, we would like to invite you to support your team and be a part of the Tournament action with a Fan Cutout at the Harrah’s Cherokee Center – Asheville! No purchase is necessary to enter. GOOD LUCK!

Can’t wait to find out if you won this contest? Save your spot today by buying your own cutout here: I WANT A FAN CUTOUT

For almost 45 years, they have been touring and playing concerts all over the world. On November 7th, the band will be inducted into the 2020 Rock and Roll Hall of Fame via a live event on HBO MAX (stream it here). In honor of their upcoming award, we are giving away (10) Blu-Ray copies of Doobie Brothers – Live from the Beacon Theatre + (10) Limited edition HBO Rock and Roll Hall of Fame Induction Ceremony posters. #RockHall2020 #RRHOF2020 #HCCAsheville

Experience the acclaimed Broadway Show like never before with the one-of-a-kind HBO special event DAVID BYRNE’S AMERICAN UTOPIA, directed by Spike Lee. Join David Byrne and 11 musicians from around the globe as they invite audiences into a joyous dreamworld where human connection, self-evolution and social justice are paramount.

This Valentine’s Day weekend, we are giving away a Family Four Pack of tickets to see Trolls! Live this May at the Harrah’s Cherokee Center – Asheville!

Join us a sit down discussion with famed astrophysicist and pop culture sensation Dr. Neil deGrasse Tyson for “An Astrophysicist Reads the Newspaper” at the Thomas Wolfe Auditorium. Dr. Tyson brings his trademark academic and illuminating prowess to exploring the world’s and Asheville’s current events. Known by the masses from his social media posts about pop culture subjects and movie premises, his effortless blend of topical modern culture and scientific logic have made him a favorite among people of all ages. In recent years, Tyson has brought his captivating personality to shows such as Cosmos: A Spacetime Odyssey, The Big Bang Theory, and cult-favorite Futurama.

Tyson is the fifth head of the world-renowned Hayden Planetarium in New York City and the first occupant of its Frederick P. Rose Directorship. He is also a research associate of the Department of Astrophysics at the American Museum of Natural History. On the lighter side, Tyson was voted “Sexiest Astrophysicist Alive” by People Magazine in 2000.

VIP tickets are available for this event. The tickets include:

Here’s your chance to score two tickets to see The Lumineers on January 31st! Enter your information below to participate.

Scroll to top
Send A Message