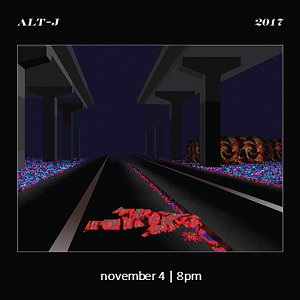 alt-J comes to the ExploreAsheville.com Arena Saturday, November 4th at 8pm with special guest Bishop Briggs. Tickets go on sale Friday, April 21 at 10am and will be available through the USCC Box Office, online at Ticketmaster.com, or by phone at 800-745-3000.

alt-J are an alternative band from the UK, formed in 2008 by four friends who met at Leeds University. Having forged their own unique sound combining elements of electronic, folk and guitar music, the band recorded and released their debut album ‘An Awesome Wave’ in 2012. Critically lauded, ‘An Awesome Wave’ won the Mercury Music Prize, an Ivor Novello ‘Album Award’ for songwriting and three BRIT award nominations. The album has now gone platinum in the UK and sold over 1,000,000 albums worldwide.

Their second album ‘This Is All Yours’ was released in September 2014 to rapturous acclaim, heading straight to no.1 in UK chart, no.4 in the US Billboard chart and subsequent top 10 positions in the majority of Europe. Now a three-piece, the band continue to excel as a genre-defying act, receiving nominations for ‘Best Alternative Album’ at The Grammys 2015 and ‘Best British Group’ and ‘Best Album’ at The BRIT Awards 2015, as well as selling out the 02 and Madison Square Garden Arenas.

The band are currently in the studio working on their 3rd album.