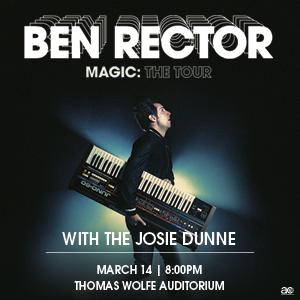 You know magic when you see it, touch it, or hear it. You’ll instantly recognize the sensation on Ben Rector’s appropriately titled seventh full-length offering, Magic. The Oklahoma-born and Nashville-based singer, songwriter, and multi-instrumentalist uncovers that feeling within 13 anthems equally rooted in whimsical nostalgia and excitement for the future.  His ceaseless touring and prolific output paid off in a big way on the 2015 breakout Brand New. Not only did it bow at #9 on the Billboard Top 200, but it yielded a massive hit in the form of the title track “Brand New.” Clocking 41 million-plus streams on Spotify, the single organically landed over 40 film and television placements, including a trailer for The Edge of Seventeen, a TV spot for Disney’s Moana, syncs in a Weight Watchers campaign starring Oprah and MLB World Series and Olympics primetime spots. At radio, it went Top 5 Hot AC and AC and Top 30 pop. Along the way, Ben has independently accumulated consumption numbers of more than 495,000 albums and 5,300,000 tracks, becoming one of the top earning artists on TuneCore, the world’s leading digital music aggregator.