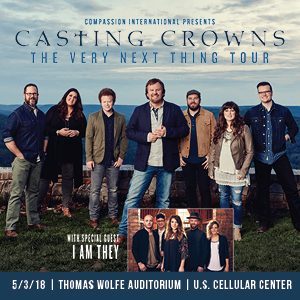 Multi-platinum selling and GRAMMY® winning group Casting Crowns comes to the Thomas Wolfe Auditorium on May 3rd during the final leg of its hugely successful “The Very Next Thing” Tour, featuring special guests I AM THEY. Tickets will go on sale Friday, January 12th at 10am and will be available through the USCC Box Office, online at Ticketmaster.com, and by phone at 800-745-3000. Presented by Compassion International, “The Very Next Thing” Tour supports Casting Crowns’ current studio album, The Very Next Thing (Beach Street/Reunion). This marks the group’s 15th release and eighth studio album since the label debut release in 2003. With more than 10 million records sold, Casting Crowns has held the position of Billboard’s top-selling act in Christian music since 2007.

ABOUT I AM THEY
I AM THEY made their national debut on Essential Records in 2015 with their self-titled album, which produced the group’s lead single, “From The Day.” Abbie Parker (vocals/harmonium), Jon McConnell (vocals/guitar/keys), Matt Hein (vocals/guitar/mandolin), Justin Shinn (keys/banjo) and Sara Palmer (drums) make up I AM THEY, whose name is inspired from John 17 where Jesus refers to his disciples as ‘they’. In their short career, I AM THEY has already made their mark in the Christian music arena, having opened for Matthew West, Matt Maher, Tenth Avenue North, Brandon Heath and Big Daddy Weave, to name a few. The band is preparing for the release of their second studio album, Trial & Triumph, slated to drop in March of 2018. For more information, visit www.iamtheyband.com.