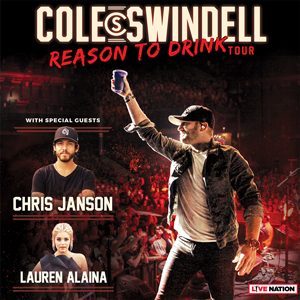 Cole Swindell comes to the USCC on Thursday, March 8th at 7:30pm with special guests Chris Janson and Lauren Alaina on his Reason to Drink Tour. Tickets go on sale Friday, December 8th at 10am and will be available through the USCC Box Office, online at Ticketmaster.com, and by phone at 800-745-3000.

Cole Swindell, the Platinum-selling 10-time No. 1 hit singer/songwriter, will wrap up his sold out fourth annual Down Home Tour at the end of January and will launch right in to his first career headlining tour, the Reason To Drink Tour, on February 15 in Allentown, PA. Joining Swindell for each of the dates on his first headlining tour are two of country music’s biggest rising stars Chris Janson and Lauren Alaina.

Cole Swindell will play U.S. Cellular Center Asheville on Thursday March 8, Crown Coliseum Fayetteville on Friday March 9, and Colonial Life Arena Columbia on Saturday March 10. Pre-sale tickets for the Reason To Drink Tour will go on sale December 5 and will go on sale to the public December 8 at LiveNation.com, the venue box offices or by phone. To purchase tickets go to www.ColeSwindell.com. Live Nation is the official tour promoter.

Since he launched his career in 2014, the Warner Bros./Warner Music Nashville recording artist has been on some of the biggest tours with some of the biggest superstars in country music including Luke Bryan, Kenny Chesney, Jason Aldean, Florida Georgia Line and Dierks Bentley. The Georgia native is excited to finally take this step in to his own headlining tour.

“I am excited to be able to take everything I have learned while on the road the last four years watching all that Luke, Jason, Kenny, Dierks, Tyler and Brian did as headliners.” said Cole Swindell. “Everything from how they treat their fans, their high-energy performances, to how they treated EVERYONE on the tour. They were great examples of how much work it takes for a successful tour. I can honestly say I’ve learned from the very best in the business. I’m ready to get out there with two of my friends, Chris Janson and Lauren Alaina. Start to finish, it’s going to be an amazing show and we’re ready to share it with you all.”

For complete information and upcoming tour dates, sign up for the Down Home Crew at www.ColeSwindell.com.

For more information or to purchase tickets go to livenation.com.

In just over three years since he made his debut on Warner Bros. Records, Swindell has racked up an impressive and incomparable record-breaking SEVEN No. 1 singles (the only solo artist in the history of the Country Aircheck/Mediabase to top the charts with first seven singles); 10 No. 1 singles as a songwriter; one 1 billion audience reaching single (“You Should Be Here”), five Platinum singles; one Gold single; a Platinum-certified debut album; a Gold-certified sophomore album (You Should Be Here) as well as numerous SONGWRITING honors and awards including being the reigning NSAI Songwriter/Artist of the Year (2016), winning back-to-back CMA Triple Play Awards in both 2015 and 2016 (for penning three No. 1 songs in a 12 month span) and Music Row’s Breakthrough Songwriter of the Year during his debut (2015). This year, Swindell has performed his 7th career No. 1 single “Flatliner,” which features his mentor/friend and 2017 WHAT THE HELL WORLD TOUR mate Dierks Bentley, on the 52nd Academy of Country Music Awards telecast live on CBS and again this summer for the “CMA Fest” special that aired this summer on ABC Television. Since launching his career in 2014, Swindell has toured with the biggest superstars in country music including Luke Bryan, Kenny Chesney, Jason Aldean, Florida Georgia Line, Dierks Bentley and has sold out his previous three Down Home Tours as well as his upcoming fourth annual Down Home Tour launching in January.

Warner Bros. Records/Warner Music Nashville country artist Chris Janson was born to entertain crowds. Janson’s recent single “Fix A Drink,” from his anticipated sophomore album Everybody, just reached No. 1 on the country radio chart and his follow-up single is the highly-acclaimed song “Drunk Girl.” In 2015, Janson’s breakthrough No. 1 Platinum single “Buy Me A Boat” was the 7th bestselling country song of the year, although his professional music career began more than 10 years ago. The singer/songwriter has also penned multiple top-charting hits including “Truck Yeah” (Tim McGraw), “That’s How I’ll Always Be” (Tim McGraw), “I Love This Life” (LoCash), and over 25 additional hit songs recorded by a long list of established artists. The electrifying multi-instrumentalist is known as much for his hit songwriting as his “infectious” (Billboard) performances, with Rolling Stone describing him as having “a mesmerizing stage presence that most arena-headlining artists would kill for.” Janson spent last summer on the road with Sam Hunt for the 15 in a 30 Tour and recently kicked off The EVERYBODY Tour with his own headlining and festival dates. He has become a Grand Ole Opry regular, taking the legendary stage more than 150 times to date, and made numerous television appearances including: The Tonight Show starring Jimmy Fallon, Late Night with Seth Meyers, CONAN, The Today Show, Live with Kelly & Ryan, the ACM Awards and the ACCA Awards. For more information about Chris you can go to his website www.chrisjanson.com or follow him on Facebook, Twitter or Instagram.

Georgia native Lauren Alaina captured America’s hearts when she appeared on Season 10 of American Idol. This year, Lauren followed up her No. 1 debuting first album, Wildflower, with the release of the eagerly-awaited Road Less Traveled. Selected as one of Rolling Stone’s Most Anticipated Albums of 2017 and praised as “full of life lessons and uplift” (PEOPLE), the collection of 12 songs all written by the young star includes Lauren’s first No. 1 hit, title track “Road Less Traveled” and her current single, “Doin’ Fine.” The “sassy Southerner with killer pipes” (PARADE) has shared the stage with superstars including Alan Jackson, Carrie Underwood, Jason Aldean and Martina McBride, plus hitting the road this summer with Luke Bryan for the Huntin’, Fishin’, And Lovin’ Every Day Tour. Lauren is one of CMT’s Next Women of Country and she earned her first CMT Music Award this summer for Breakthrough Video of the Year. Lauren recently performed on the 51st Annual CMA Awards where she was also nominated for her very first CMA Award for New Artist of the Year. Lauren has also been nominated for several Teen Choice Awards, Radio Disney Awards and this spring, she earned her first ACM nomination for New Female Vocalist of the Year. Lauren brings her signature “powerhouse, honey-toned vocals” (Rolling Stone) to country radio with her incredibly moving current single, “Doin’ Fine.” For more information, visit www.LaurenAlainaOfficial.com.