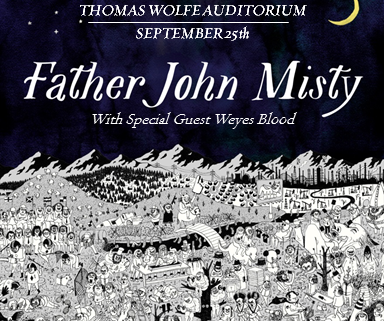 Father John Misty comes to the Thomas Wolfe Auditorium with special guest Weyes Blood on Monday, September 25 at 8:00pm. Tickets go on sale Friday April 14th at 10am and will be available through the USCC Box Office, online at Ticketmaster.com, or by phone at 800-745-3000.

What people are saying about Pure Comedy:

“…His sly yet compassionate new album, Pure Comedy…dials back some of the sarcasm and posing — and much of the busy musical action — of his previous work in favor of stately but earnestly presented tunes about the necessity of human connection.” – LA Times

“By lulling listeners with a gorgeous melody only to confront them with something such as human extinction, he believes he’s aiming for a loftier target….With Pure Comedy, he hits it. Although it was written and recorded prior to the 2016 U.S. election, Misty’s third album is almost unnervingly prescient in its political and religious commentary, no doubt informed by Tillman’s devout Christian upbringing. It’s a behemoth of a record, not only for its 75-minute running time, but its exploration of existential questions.” – Globe and Mail