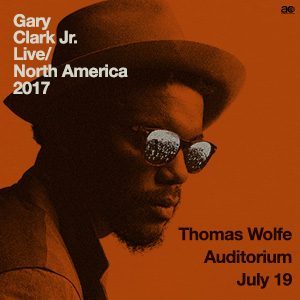 Gary Clark Jr. comes to the Thomas Wolfe Auditorium for his North America 2017 tour on Wednesday, July 19th with special guest Jackie Venson (jackievenson.com). Tickets go on sale Friday, March 31st and will be available through the USCC Box Office, online at Ticketmaster.com, or by phone at 800-745-3000.

Gary Clark Jr., Grammy-award-winning guitarist, vocalist, and songwriter, has announced new dates for his spring/summer tour. The tour kicks off May 2, in his hometown of Austin, TX, and will take him across North America through the end of September. Tickets go on sale this Friday, March 31. The tour also includes Clark’s appearances as a special guest at Eric Clapton’s upcoming 50th anniversary shows at Madison Square Garden in New York City and at The Forum in Los Angeles. All tour dates are listed below, with newly announced dates in bold.