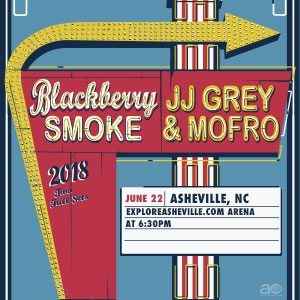 JJ Grey & Mofro and Blackberry Smoke come to the ExploreAsheville.com Arena with special guest The Texas Gentlemen on Friday, June 22nd at 6:30pm. Tickets go on sale Friday, April 13th at 10am and will be available through the USCC Box Office, online at Ticketmaster.com, and by phone at 800-745-3000.

From the days of playing greasy local juke joints to headlining major festivals, JJ Grey remains an unfettered, blissful performer, singing with a blue-collared spirit over the bone-deep grooves of his compositions. His presence before an audience is something startling and immediate, at times a funk rave-up, other times a sort of mass-absolution for the mortal weaknesses that make him and his audience human. When you see JJ Grey and his band Mofro live—and you truly, absolutely must—the man is fearless.

Onstage, Grey delivers his songs with compassion and a relentless honesty, but perhaps not until Ol’ Glory has a studio record captured the fierceness and intimacy that defines a Grey live performance. “I wanted that crucial lived-in feel,” Grey says of Ol’ Glory, and here he hits his mark. On the new album, Grey and his current Mofro lineup offer grace and groove in equal measure, with an easygoing quality to the production that makes those beautiful muscular drum-breaks sound as though the band has set up in your living room.

Grey’s most treasured albums include Otis Redding’s In Person at the Whisky a Go Go and Jerry Reed’s greatest hits, and the singer once told me that he grew up “wanting to be Jerry Reed but with less of a country, more of a soul thing.” With Ol’ Glory, Grey does his idols proud. It’s a country record where the stories are all part of one great mystery; it’s a blues record with one foot in the church; it’s a Memphis soul record that takes place in the country.

In short, Ol’ Glory is that most singular thing, a record by JJ Grey—the north Florida sage and soulbent swamp rocker.

This fluidity has paid off handsomely, in the form of two Billboard chart-topping country albums, 2015’s Holding All The Roses and 2016’s Like An Arrow. (For good measure, the latter also topped Billboard’s Americana/Folk album chart.)

Find A Light, Blackberry Smoke’s sixth studio album, doubles down on diversity. Songs hew toward easygoing roots-rock (“Run Away From It All”) and Southern rock stomps (“The Crooked Kind”), as well as stripped-down acoustic numbers (“I’ve Got This Song”) and bruising alt-country (“Nobody Gives A Damn”). Rich instrumental flourishes—keening fiddle, solemn organ and bar-band piano boogie—add further depth and resonance.

“That’s one of my favorite things about Blackberry Smoke albums—there’s a lot of variety,” Starr says. “My favorite albums through the years are built that way, too. I love a record that keeps you guessing. I love the fact that our records are sort of a ride, with different types of songs and different vibes.”

At its core, Find A Light illustrates the efficiency and chemistry of Blackberry Smoke’s instrumentalists, who have no trouble translating the band’s loose live shows into crisp studio recordings. “We always record together,” Starr says. “That’s what bands do. And you go in and listen, and think, ‘Wow. How did that happen? What just happened? That was magic. That was magical. Can we do that again?’

“I’m always blown away by my bandmates’ sympathy for the song,” he adds. “We all agree that that’s the way to be in this band is to play for the song—the song is the vehicle.”

This commitment to putting the music first above all other considerations is one reason Blackberry Smoke has continued to evolve during their time together. And it also explains why Find A Light’s sonic progressions and expansions sound so effortless.

“We didn’t want to repeat ourselves,” Starr says. “I don’t ever want to make a record that ourselves or are fans are like, ‘It’s the same old thing.’ But I still get a real lift from listening to Find A Light, even after multiple listens. I really am proud of the work that we accomplished.”