Johnnyswim + Drew Holcomb and the Neighbors 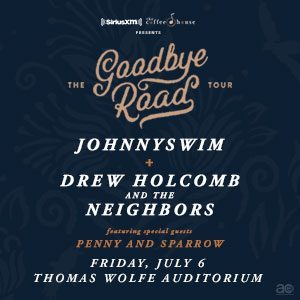 Johnnyswim + Drew Holcomb and the Neighbors come to the Thomas Wolfe Auditorium on Friday, July 6th at 8pm on their Goodbye Road Tour presented by SiriumXM and featuring special guests Penny and Sparrow. Tickets go on sale Friday, April 27th at 10am and will be available through the USCC Box Office, online at Ticketmaster.com, and by phone at 800-745-3000.

Separately, Johnnyswim and Drew Holcomb & the Neighbors are two of the decade’s most acclaimed acts, swirling a range of influences — from modern folk and pop/rock to bluesy, southern soul — into songs like “Home” and “American Beauty.” They join forces for Goodbye Road, a stunning EP that reimagines the musicians as a supergroup of singer/songwriters.

Featuring the harmony-heavy vocals of Penny & Sparrow on several tracks, Goodbye Road was written and recorded in the wake of an emotionally-charged year that included the racial assaults in Charlottesville, the loss of rock & roll icon Tom Petty, and the heartbreaking attack upon an audience of music fans at the Route 91 Harvest Festival in Las Vegas. The result is a record that not only doubles down on swooning, sweeping melodies, but also offers messages of hope and resilience. It’s bright, clear-eyed music for cloudier times.

“One of the things I’ve always loved about Abner and Amanda’s writing,” says Holcomb, referencing the husband-and-wife team behind Johnnyswim’s soulful stomp, “is that it dives into the dark parts of humanity, but still comes out of that darkness with hope and light. When we were recording these songs, it was a hard moment. There was a lot happening in the world, and we felt a mutual sorrow about it, but we also shared the belief that sorrow didn’t have to be the entirety of the story.”

Songs like “Ring the Bells” and the gospel-influenced title track were written in California, during Holcomb’s first visit to Abner and Amanda’s Los Angeles home. Meanwhile, “Just Your Memory” came together over several rounds of bourbon in a Nashville basement, with Holcomb working alongside Penny & Sparrow’s Andy Baxter and Kyle Jahnke. The songwriting sessions were cathartic and inspirational, sandwiched into a short break between the three bands’ touring schedules. Without any time to second-guess themselves, everyone dove into the creative process, channeling the uncertainties of the modern world into songs that emphasized solidarity over sorrow.

“It was three days after the political rallies in Charlottesville,” Abner remembers of the Los Angeles songwriting session. “When we wrote ‘Ring the Bells,’ we were all sitting in the same room, thinking, ‘Enough is enough. We want to scream something into the world, but how do we make it productive?’ In that moment of agony and tension — the very moment you’re tempted to be hopeless — you can choose to give in to those dark feelings or rise above them. ‘Ring the Bells’ is our productive shout.”

Church-choir harmonies, orchestral strings, and call-and-response vocals help transform “Goodbye Road” into a modern-day spiritual, albeit one that preaches its own gospel of inclusivity. It’s an anthem of acceptance. It’s also a song about faith — not only faith in a higher power, but in the bonds that connect all humans who’re willing to stand up for their beliefs. “Strangers, outcasts, artists and thieves / Misfits, legends and lost refugees / We may not be where we thought we would be / But we made our home down Goodbye Road,” goes the song’s chorus, which shines a light on trailblazers of all stripes.

Meanwhile, the group’s acoustic cover of “I Won’t Back Down” pays tribute to the late Tom Petty, who passed away in a California hospital the same week Holcomb, Johnnyswim, and Penny & Sparrow recorded Goodbye Road‘s five songs in Nashville. Different singers take the lead throughout the song, turning the song into a showcase for Holcomb’s Memphis twang and Johnnyswim’s coed croon. A stripped-down, tender revision of a song about perseverance, “I Won’t Back Down” also reads like the album’s mission statement. When life gets you down… look up.

“What a necessary time to be making music, man,” Abner says. “Amanda is in this group chat with a bunch of supermoms who have kids. They’ll text each other. One day, they were commiserating about how scary it is to raise kids in this social environment, and I loved seeing Amanda get so fired up about it. She said it wasn’t scary. It was necessary. The world needs us to teach children not to hold on to hopelessness, but to be the light in a world that’s desperate for it. I feel like something would get rotten inside of me if I didn’t have these people to lock arms with.”

Rooted in a mix of acoustic guitars, classic songwriting, upright pianos, ringing reverb, and stacked harmonies, Goodbye Road is an album about endings and new beginnings. About finding the courage to move ahead, with your friends serving as support. Collaboratively written, it brings together three acts and five singer/songwriters, proof that there’s strength in numbers.