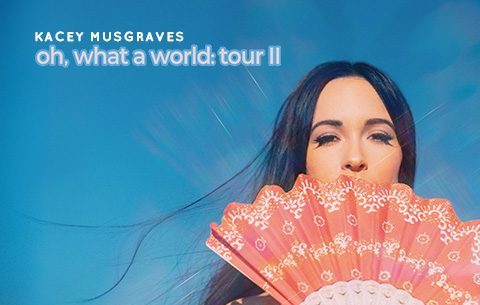 With her third studio album Golden Hour, multiple GRAMMY Award-winning singer-songwriter Kacey Musgraves earned her third #1 debut on Billboard’s Top Country Albums chart. Golden Hour has received massive critical acclaim as one of the best of albums of 2018, and has been nominated for 4 GRAMMY Awards, including Album of the Year and Best Country Album. These nominations follow Kacey’s historic Album of the Year win at the CMA Awards, with Kacey becoming the first female to win the category in four years and only the sixth female in the show’s 52-year history to do so. Kacey has toured extensively over the past year, playing to sold-out crowds around the world from her headlining Oh, What a World: Tour to major festivals including Stagecoach, C2C: Country to Country Festival, Fuji Rocks in Japan, and Global Citizen Festival: Mandela 100 in South Africa, with many more festival and tour dates to come in 2019. NPR declares “Kacey Musgraves is magnetic — there are no two ways about it,” and Variety proclaims “it’s hard to imagine that within the next couple of years Kacey Musgraves won’t be one of the biggest stars in music.