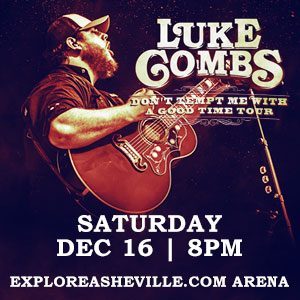 Luke Combs comes to the ExploreAsheville.com Arena on December 16th at 8pm on his Don’t Tempt Me With A Good Time Tour. Tickets go on sale Friday, August 18th at 10am and will be available through the USCC Box Office, online at Ticketmaster.com, and by phone at 800-745-3000.

Luke Combs is a 26-year-old musician with a passion for playing country music. Luke began to develop his craft in the summer of 2011 while attending Appalachian State University and has been plowing ahead ever since. After 3 years playing with his band in his home state of North Carolina, Luke made the move to Nashville in September of 2014. Quickly creating a buzz amongst the musical community, Luke released his single “Hurricane” on June 16th of 2015 and saw it rise into the iTunes Country Charts Top 10 day of release as well as the Billboard Hot Country Top 40.

Watching Luke Combs give his all during a sweaty, jam-packed show in Nashville for rowdy fans and radio power-players is to understand why he’s come so far, so quickly. Both onstage in front of thousands or alone in a room with his guitar, the North Carolina singer-songwriter knows who he is, where he comes from and where he wants to go. And on his debut album for River House Artists/Columbia Nashville, This One’s for You, he invites listeners to share in his remarkable journey.

In the end, the album showcases a singer and writer unafraid to tell his story without pretension or from behind a false front. In a genre that throws around words like “genuine” and “real” with abandon, few artists so earn those adjectives like Luke. He is the walking, writing and singing embodiment of three chords and the truth.

“There’s no smoke and mirrors with me. There was never any point where I picked up the guitar and said, ‘I want to be a country singer.’ I just wrote songs and they were country songs,” he says. “Now I get to live my life writing and playing for people around the country. What a cool thing, right?”