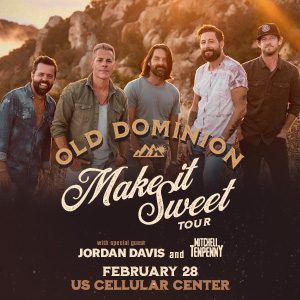 About Old Dominion:
Proving that they are not your average country band, Old Dominion blends old-fashioned country charm, lyrical wit and rock’n’roll grit into radio-friendly, hook-heavy pop nuggets. Old Dominion recently released their highly anticipated sophomore album, Happy Endings, which debuted at #1 on the Billboard Top Country Albums Chart and #7 of the Top 200. Upholding an unbelievable hot streak, the album features three singles “Written in the Sand,” “No Such This As A Broken Heart” and “Hotel Key,” which hit #1 on Billboard County Airplay and MediaBase charts. This achievement marks the Platinum-selling country quintet’s sixth total #1s. In addition to their ACM win, Old Dominion has also been nominated for an ACM for “Album of the Year,” as well as an American Music Award, TWo CMA Awards, and recently emerged as one of the hottest breaking bands in country music with their debut album Meat And Candy, which fused clever lyrics and an infectious sound. The album, which was certified Gold by the RIAA, included several top selling hits included “Break Up With Him” (Platinum), “Snapback” (Gold) and the anthemic “Song For Another Time,” which hit #1 on the Billboard Country Airplay and MediaBase charts. Following its release, the band was notably named ACM New Group of the Year, ACCA Breakthrough Group of the Year and AIMP Songwriter Artist of the Year and Music Row Breakthrough Artist of the Year. Old Dominion consists of lead singer Matthew Ramsey, lead guitarist Brad Tursi, multi-instrumentalist Trevor Rosen, bassist Geoff Sprung, and drummer Whit Sellers.

The Cat in the Hat