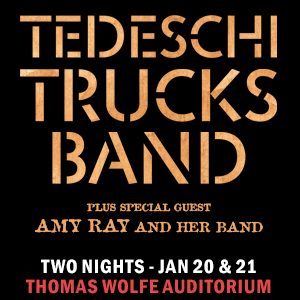 Tedeschi Trucks Band comes to the Thomas Wolfe Auditorium on Sunday, January 21st at 7pm with Amy Ray and Her Band. Tickets go on sale Thursday, October 5th at 10am and will be available through the US Cellular Center Box Office, online at Ticketmaster.com, and by phone at 800-745-3000.

The excitement is palpable in Asheville, NC, for the return of Grammy Award-winners, Tededschi Trucks Band, as evidenced by last week’s quick sell out of their Saturday, January 20 show at the US Cellular Center’s Thomas Wolfe Auditorium. The 12-piece blues rock tour de force has responded to the overwhleming demand, adding a second performance on Sunday, January 21. Both nights will include a supporting set by Amy Ray, of Indigo Girls, and her band. Tickets for the January 21 show will be on sale this Thursday, October 5 at 10:00 AM.

In March, Tedeschi Trucks Band followed up its award-winning studio album Let Me Get By with a live collection, Live from the Fox Oakland, drawn from its September 2016 concert at the Bay-Area theatre. The CD/DVD set beautifully captures the 12-piece group’s incredible power in concert that has earned them a dedicated and growing following around the world.  It’s the band’s first-ever concert DVD, displaying on film “that exemplary live interplay…” (Rolling Stone) and “the perfect way to absorb the impact of the Tedeschi Trucks Band firing on all cylinders in their natural habitat.” (American Songwriter)

The live set follows four critically-hailed and commercially successful TTB albums, including their Grammy-winning inaugural studio effort Revelator (2011), Made Up Mind two years later and 2016’s Let Me Get By, the first to be solely produced by Trucks and written in house in the TTB family and called by the Associated Press “one of the great records of the year”.

From their steady rise as solo artists, now to one of music’s most prominent partnerships, Tedeschi and Trucks have climbed to new peaks, both together and individually.  From appearances at the White House to tributes for B.B. King, Bob Dylan and Hubert Sumlin, or guesting on albums by John Prine, Rosanne Cash, Eric Church, the duo is constantly in-demand.  Most recently, the pair shared the stage with Jackson Browne, Aaron Neville and Billy Gibbons this past March at the Love Rocks NYC! benefit concert.

Following their most successful touring year to-date, the group eagerly returned to the road in 2017.  Highlights already have included another edition of the band’s Florida-based Sunshine Music Festival, sold-out multiple nights in Nashville, Chicago, and Washington DC, and an extended European run.  Additionally this summer, TTB will anchor a third installment of a 22-date, cross-country “Wheels of Soul” amphitheater tour, once again as headliners of a bill curated by Trucks that adds Hot Tuna and The Wood Brothers to their list of “rock ‘n soul” collaborators.

Praised by reviewers for their “joy-filled blast of blues, soul and rock” (Philadelphia Inquirer) and “stellar musicianship” (Denver Post), the group delivers an ever-growing repertoire of originals and tasty covers that have dazzled fans and critics alike: “Tedeschi Trucks took us to church,” (No Depression). “Spectacle and sizzle,” (Oakland Press). “(An) excitement level through the roof,” (Florida Times-Union).

Now in their eighth year, Grammy-winning Tedeschi Trucks Band is a 12-piece ensemble of multiple vocalists, horns, and drummers, led by the husband-and-wife team of guitarist Derek Trucks and guitarist-singer Susan Tedeschi. They are a true collective; a rarity in rock-and-roll with every musician featured nightly while serving the band’s unified vision, pushing the boundaries of group dynamics and improvisation to inspiring new heights.