The Head And The Heart - HCCA

The Head And The Heart 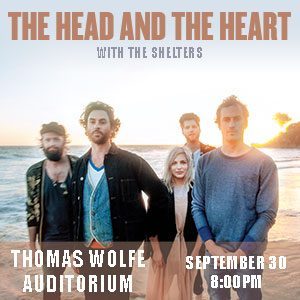 The Head And The Heart comes to the Thomas Wolfe Auditorium with special guest The Shelters on Saturday, September 30th at 8pm. Tickets go on sale Friday, June 16th at 10am and will be available through the USCC Box Office, online at Ticketmaster.com, or by phone at 800-745-3000.

In 2014, exhausted after four years of non-stop touring, the six members of the Head And The Heart pointed their individual compasses to new cities, new relationships and new adventures. Pianist Kenny Hensley learned to fly planes and enrolled in kung-fu training in China, while bassist Chris Zasche packed up a camper and went off the grid in the Canadian Rockies. Drummer Tyler Williams put down stakes across the country and immersed himself in the burgeoning music scene in Richmond, Va., while vocalist/multi-instrumentalist Charity Rose Thielen honed her compositional skills by writing for such legends as Mavis Staples.

After his own cross-country trip to reconnect with family and friends, vocalist/guitarist Jonathan Russell traveled to Haiti and found inspiration working with the non-profit Artists For Peace And Justice. “When I found out we were going to have a significant amount of time off, I saw it as an opportunity to touch base again — to listen to what other people were saying and what they were going through,” he says. “I really wanted to make sure that I reconnected with a world that was starting to feel farther and farther away.”

When the Head And The Heart regrouped last summer in Stinson Beach, Ca., to start writing together again, “it almost felt like we were a new band, trying things we hadn’t tried,” Zasche recalls. “We stayed at a bungalow on the beach. We’d wake up, have coffee and go boogie boarding. We were ready and excited to be back together.”

That renewed sense of purpose can be felt throughout “Signs Of Light,” the group’s first release for Warner Bros. Records. “This album isn’t about us now having achieved our dreams,” says Thielen. “The day we started being able to live off our art was the day we achieved our dreams, in my mind. This is the album where we really fell into our true voices as those artists.”

Recorded in Nashville with producer Jay Joyce (Eric Church, Cage The Elephant), “Signs Of Light” crackles with the upbeat, sing-a-long energy of the Head And The Heart’s finest work. Lead single “All We Ever Knew,” which was written during the “Let’s Be Still” era but never captured to the band’s satisfaction until now, is sure to be a crowd-pleaser, while “Turn It Around” seems primed to be a future concert staple, matching its inspirational message with a lush and multi-layered soundscape.

Throughout, the colors are brighter, the electric guitars are louder and the musical touchstones more universal. The propulsive, smile-inducing ode to Los Angeles “City Of Angels” and the head-nodding “Rhythm & Blues” nod to classic Fleetwood Mac, while the organ-flecked “Dreamer” is a timeless-sounding ballad that could have been beamed straight out of an old jukebox.

“Jay was really adamant about getting a great performance,” Russell says. “We have all the tools in the world to make something sound real or more excitable, but it’s never really as true as the band in the room for the whole take. ‘City Of Angels’ — we had previously re-cut that song and played it so many times. But within two takes in Nashville, we nailed it. It felt like we were playing on a massive stage in front of tons of people.”

Elsewhere, Thielen’s “Library Magic” could almost be seen as a letter to the other five members, acknowledging the ups-and-downs of life in a successful band while celebrating the unique and constantly evolving bond between them. “I wrote that song after having our first real time off as a band,” she says. “It touches on the storied relationships between band members trying to survive living in a van off of accelerated time and gas station crafts for years straight, but it also applies to any of life’s relationships.”

The Head And The Heart’s 2011 self-titled debut album captured a nascent but undeniable creative partnership between six strangers thrown together by little more than a shared love of music. It became one of Sub Pop Records’ best-selling debut releases ever, and rocketed the band to acclaim well beyond its then-home base in Seattle. The formative experiences that followed both on and off the stage heavily informed the 2013 follow-up “Let’s Be Still,” which continues to remind Russell of “the stale beer, bleach and potato chips from all the venues we saw once this became our livelihood.”

On “Signs Of Light,” that gamut of emotions is felt most deeply on the Josiah Johnson-penned title track, which none of the other members had ever heard until they happened to walk in on him playing it over and over at the piano during pre-production in El Paso, Texas. “It was one of those moments where no one talks,” Russell remembers. “No one needs the chords; no one is looking up. You simply pick up your instrument and play. The next thing you know, nearly 10 minutes have gone by and you have no idea how or why or what just happened.”