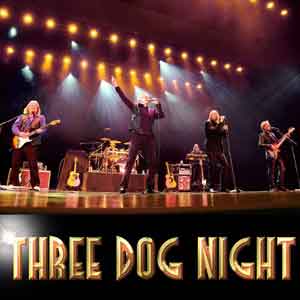 Coming to US Cellular Center’s Thomas Wolfe Auditorium on Saturday, January 12…Three Dog Night. Tickets go on sale September 28 at 10:00am and will be available through the USCC Box Office, online at Ticketmaster.com, and by phone at 800-745-3000.

Their hits wind through the fabric of pop culture today, whether on the radio where they are heard day in and day out, in TV commercials or in major motion pictures — songs like “Mama Told Me (Not To Come)”, “Joy to the World”, “Black and White”, “Shambala” and “One” serve to heighten our emotions and crystallize Three Dog Night’s continuing popularity.

This Grammy-nominated band is not content resting on its legacy alone. Always working to expand its audience, Three Dog Night has embraced and been embraced by 21st century music technology. New and existing fans buy the band’s music on iTunes as well as at record stores. In fact, releases from this decade alone have sold well over a million copies.

Three Dog Night recorded the music of the best (and mostly undiscovered) new songwriters of that time including Harry Nilsson, Randy Newman, Elton John, Laura Nyro, Paul Williams and Hoyt Axton among many others. The group’s eclectic taste, combined with its ability to recognize and record hits in a unique, distinctive and appealing style, resulted in Three Dog Night dominating the charts for years.