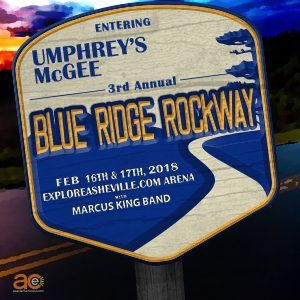 Umphrey’s McGee returns to the ExploreAsheville.com for the 3rd Annual Blue Ridge Rockway on February 16th & 17th, a two-night stop on their It’s Not Us Tour, celebrating 20 years as a band. Both shows will feature special guest The Marcus King Band, are general admission, and begin at 8:00pm. Tickets are $35 in advance and $38 day of show. Two-day passes are $62.50. Tickets go on sale Friday October 27th at 11am and will be available through the USCC Box Office, online at Ticketmaster.com, and by phone at 800-745-3000.

VIP packages are available through the Umphrey’s McGee official website. See below for details.

Team umVIP paves the way for you to cruise the Rockway in style. We have secured a private umVIP lounge area located in the arena’s club suites for you to enjoy throughout each night, complete with a stellar viewing area, flat screens displaying the show, a private bar, and snacks. It’s the perfect spot for you to kick it with your crew, spread out and relax, get to know your fellow umVIPs, and enjoy the convenient private amenities. Packages also include exclusive access to a private umVIP soundcheck viewing prior to doors on Saturday, February 17th.

Please see below for a full listing of The umVIP Blue Ridge Rockway Amenities.

“Back to the moment, and digging deep enough this time/You forget about your future at your past’s expense/You know life is only living in the present tense.” – “The Linear”

After 19-plus years of performing more than 100 concerts annually, releasing nine studio albums and selling more than 4.2 million tracks online, Umphrey’s McGee might be forgiven if they chose to rest on their laurels. But then that wouldn’t be consistent with the work ethic demonstrated by the band, which consistently attempts to raise the bar, setting and achieving new goals since forming on the Notre Dame campus in South Bend, Indiana, in 1997. After releasing their eighth studio album, Similar Skin, the first for their own indie label, Nothing Too Fancy (N2F) Music (distributed by RED), the group continued to push the envelope and test the limits. The London Session, was a dream come true for the members having been recorded at the legendary Studio Two at historic Abbey Road. The stealth recording session yielded 10 tracks in a single day, proving once again, the prolific UM waits for no one.

As a follow up to The London Session, the envelope pushing continues with the November 11th release of ZONKEY. Umphrey’s McGee has been arranging and performing original mashups live for over eight years. It was only a matter of when, not if, some of those innovative concoctions would find their way into a studio. An album of 12 unique mashups, conceived and arranged by the band, ZONKEY is as seamless as it is bizarre, playful as it is razor sharp. Bits and pieces of classic songs are culled from 40-plus years of popular music from 70s Reggae to 80s Pop to 90s Metal and everywhere in between. From Radiohead mashed with Beck, The Weeknd with Fleetwood Mac, Talking Heads with Bob Marley, Metallica with Gorillaz . . . nothing is off limits.

The original Umphrey’s McGee played a mix of originals and cover songs, waiting just eight months to release their debut album, the cheekily titled Greatest Hits Volume III. Their initial “proper” recording, Local Band Does OK, came out in 2002, followed shortly afterward by an appearance at the first-ever Bonnaroo in Tennessee, selling more albums than any other band on the bill. The 2007 double album, Live at the Murat, earned a four-star review in Rolling Stone and a Jammy for Best Live Album.

Despite attempts at categorizing UM, the band has devoted its craft to making their devoted followers feel as if they are part of something larger, through such technology-fueled innovations as fan-curated sets, the immersive high-end audio offering, “Headphones & Snowcones,” where the pristine sound of the live soundboard mix is piped wirelessly through high-end personal monitor systems and headphones, as well as making every live show since 2005 available via their live music portal UMLive.net. UM were also the first group to launch its own single-artist streaming service.

Finding themselves in London for three shows at the Brooklyn Bowl in June 2014, the idea of recording at Abbey Road was first proposed by Umphrey’s producer Manny Sanchez, a notion, as Brendan Bayliss told Rolling Stone that seemed as likely as “being asked to give a sermon at the Vatican.”

“It wasn’t a goal,” he explains, “because it never seemed like a possibility.” But never to be bound by what seems possible, UM secured a coveted day at the world’s most famous recording studio and dove in headfirst.

Twelve hours after first setting foot in Abbey Road Studios, just before midnight, Umphrey’s McGee left the historic room with their own new album, The London Session, what Rolling Stone dubs “a historical primer, an evolution story inside 51 minutes.”

This November 11th, prepare to get ZONKEY’d. An album unlike any previous Umphrey’s McGee effort, this unique take on the mash-up concept is yet another example that there aren’t many places Umphrey’s McGee won’t take you.

Umphrey’s McGee are more than just a rock band – through nearly two decades, they have proven to be on the cutting-edge of both music and technology, super-serving their fans through a community that stretches from the campus of Notre Dame to the hallowed halls of Abbey Road.